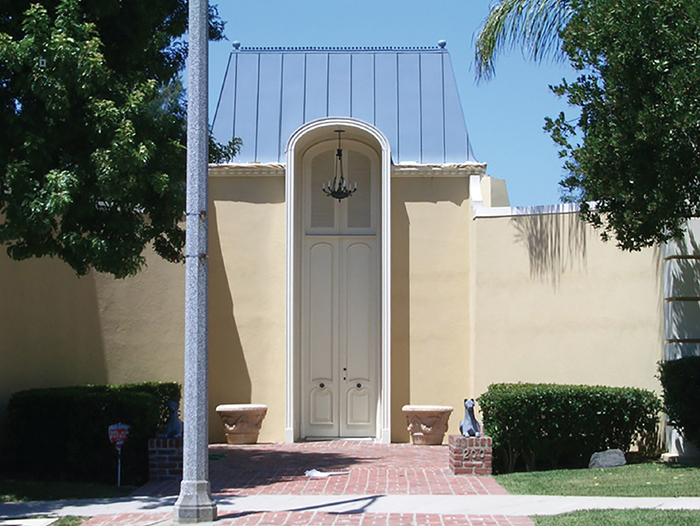 I had long been aware of John Woolf’s designs ever since falling in love with all that the famous Slim Aarons’ photo of Robert Evans’ house represented. There was Beverly Hills, distilled into a single photograph.

I educated myself about Woolf the best I could, searched out and photographed his confections that I easily justified placing in the same scrapbook as the Case Study Houses in Southern California, and the work of the high minders like Neutra, Schindler, Koenig, and Soriano. Yes, it was highly decorative, but it also reflected the same sophisticated idealization of an aspirational and theatrical Southern California aesthetic.

His Reynolds house, 1958, in Hancock Park was a particular favorite. It seemed to have all the great Woolf trademarks for me—the fortress front with mansard roof, phony Greco-Roman accents, and the animated elongated opening with a signature, dangling chandelier. It was the swanky house a Warner Brothers cartoon millionaire would live in—or the Drysdales from The Beverly Hillbillies—personifying nouveau riche, slightly vulgar, modernity with money.

Years later, when looking for an office/house, I was offered an early Woolf design in West Hollywood owned by the movie star dress designer, Michael Novarese, in the neighborhood now known as the Norma Triangle. This small area bordering Beverly Hills was sprinkled with Woolf’s early designs and they remain perhaps my favorites. I quickly learned the neighborhood was originally a small town called Sherman and

these small bungalows were built for housing the workers at the nearby train yard, the large area now occupied by the Pacific Design Center. After Sherman morphed into West Hollywood, and was lit upon by decorators and designers, Woolf would take these plain Spanish Revival cottages and gussy them (way) up practicing his nascent gay glam ideas on these little boxes. There are still quite a few left and they should be cherished and preserved, plaqued and restored.

The home I rented was perfect for me at the time, a sky-lit studio in the back was accessed through a dramatic atrium in front after passing through the over-scaled, black lacquered, double French doors in front. I would try to light the front antique gas lantern each evening. Woolf turned the stairs to make the approach a bit more elegant. As a proving ground, before he literally and metaphorically crossed Doheny into the gilded

blocks of nearby Beverly Hills, these bungalows almost seem like maquettes for his mature work which still today reeks of a unique and original distinctive Hollywood style.