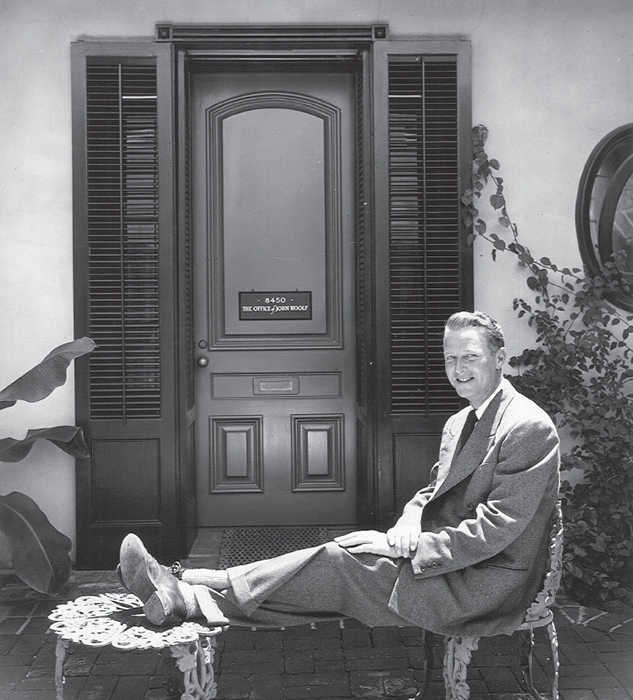 I heard many, many stories about John Elgin Woolf from Robert Woolf and Gene Woolf, and John Woolf’s dear friend Daphne Ireland. A revered gentleman, regal, and self-made, he was intense and quiet. He was not a rule-breaker, but rather repurposed the rules. That’s made evident in his architecture as well as his personal life. He repurposed the rules and constructed his own family. To quote Robert, “That’s how it was done then.” He was referring to adoption. Marriage was an unthinkable construction for what they were. They were a modern family.

Those that weren’t close to him bandy about the names “John” and “Jack.” He was simply called “Papa.”

Papa was from Georgia, Robert and Gene were both Texans. They took a shine to me being from Mississippi and especially liked my lineage to Lucius Quintus Cincinnatus Lamar. They were Bon Vivants! I was invited into their home for every holiday or important party. I even lived under their roof at different times in Montecito. The Woolfs met us at a Santa Barbara/Montecito social and quickly brought Elizabeth, Kerry and me into the fold. We were all Southern and brought “life” back into their home, Robert would say. We attended everything as family, including funerals and weddings. Once I scattered the ashes of old friends (who they were responsible for) from my surfboard in front of the Biltmore and Butterfly Beach.

Papa took Robert under his wing and together they designed and decorated for the wealthiest Los Angelenos with homes all across the country. Robert’s strength as a “decorator” (he preferred that term) was self taught and innate. The family gave me their library of books collected by Papa, Robert and Gene. There are notes and checkmarks left by them and it’s fascinating to see how they took design elements from the past and reinserted them into their work. They were “period” and strict. I can still see the spark in Robert’s eye when he quoted Papa, musing, “You only get one gimmick in a room.”

A mansard roof and Pullman door were signature elements of their look, both abstracted from those books. Their personal homes were grand, chock full of the finest examples of Continental antiques covered in the finest silks. Scalamandre was a favorite. I remember Mrs. Doheny’s Coromandel screen and Billy Haines sofas, Greco-Roman statuary. Canton porcelains (Mottahedeh) were used in the kitchen and multiple colorful sets were used for formal dining. Their table was Italian and mirror-topped. They consigned all the artisans of the day to make exquisite lighting and upholstered walls in a specific hue of terra cotta. The exterior color for personal homes was a pink. It was brought back as a plaster fragment from a trip to Italy. They had a skilled painter mix it. (I have the secret formula well guarded.) They lived a well-curated life directed by the exactness of Papa Woolf. Consequently, the rich and famous wanted to live like they did. They bought, by extension, the vision of John Elgin Woolf.